skip to main | skip to sidebar

It's another blazing hot summer day here in Houston and playing indoors has worn itself out, playing in the front yard and trying to stay in our 2 feet of shade is almost impossible when you have four mobile children and so I decided to do an impromptu trip to Target for family entertainment.

There are not many impromptu trips with four babies, but I thought, why not?  So whilst everyone is playing in the inches of shade, I pack up the car with RunAbout, diaper bag and a water for me. I buckle the kids in their seats, with just their onesies on, Noah's still showing the remnants of lunch (this would typically mortify me - but I'm learning that no one actually ever looks at their outfits when we're out, they're just in awe of the stroller, really).

We get to Target, scope out my parking spot, which 1) has to be next to the cart corral and 2) be a spot that I can pull through so I never have to put my Suburban in reverse and endanger all living creatures around me.  I find the spot, go to take the RunAbout off of the hitch and realize that I am so close to the cart corral that I cannot just drag it off like normal but have to lift the sucker down. Ugh, I not so gracefully get it down, wedge it between the car and the carts so no other cars can hit it while I'm getting the babies out one by one. I come around to start getting them out and SLIP....right on a banana that someone has graciously left behind the passenger door. Who does that? Okay, I get it together and go to get Sophia who has decided to leave behind something of her own which I must take care of immediately. Back out to the back of the car to change her. Now into the stroller with everyone else and finally into the store. We have a nice little shopping trip and back out to the car we go.

As I'm walking, I realize that another car is following us.  The woman rolls down her window and so politely says, "We just had to see how you are going to do this." I was a little perplexed thinking,  do what?  Then I realized she was talking about watching me put all of the babies back into the car in the blazing heat. I smiled and said, "Oh, it's just one at a time." knowing she'd be on her way. But no, she parks her car on the other side of the cart corral and seriously watches me the entire time I am sweating to death putting all of the babies into their car seats, strapping them in and then finally, as I heave ho the RunAbout onto the hitch. And as I walk to the driver side she hollers, "That was a pretty good job! Good luck to you!"  A pretty good job? Just a  pretty good job? I was mortified! I thought it was pretty spectacular that I could get all of that done, with an audience and not have a break down. And since when did the circus become free of charge?  All this said, I must remember: "In everything give thanks for this is the will of God in Christ Jesus for You." (1 Thessalonians 5:18)  And so, I'm thankful for an e-ventful day, one that I could share with all of you! :)

Couldn't Vent Without Some Photos So Here Are Some of Our Little Clowns:

Finn Has The Kissing Booth 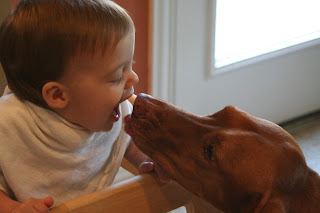 But Watch Out For His Tooth! 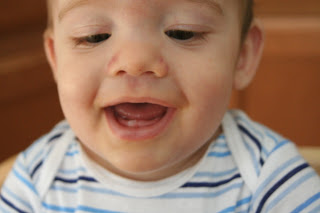 Sophia Will Read Your Fortune 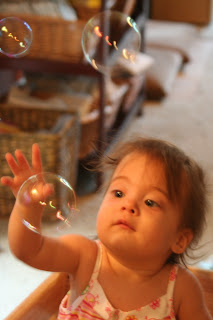 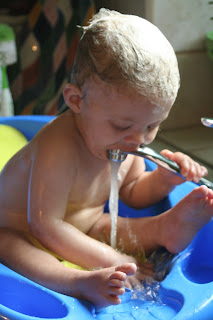 And Noah's The Giggling Juggler 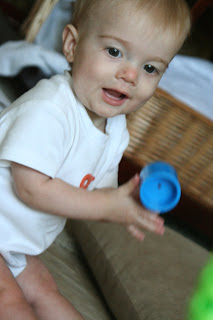 Posted by Goerlich Quadruplets at 8:10 PM

I'm so sorry, but I am laughing. I really think you should have told her there was a cover charge for having entertainment provided with a shopping trip. I don't understand how someone could just sit there and not offer to help at least because they are all too cute to ignore. Can't wait to see you again!
"...God has brought me laughter, and everyone who hears about this will laugh with me." Genesis 21:6
Love to all!

I cant belive the woman just watched you! Not that you would have let her have one of the babies, I just cant believe she admitted she was just going to sit there and watch! Good job for you getting out of the house though girl! I debate going to Target in this Houston heat with just 1 kid! Kudos to you! Thanks for the laugh though!

OH my goodness. Sure, a woman out and about with quads is spectacular, but seriously? To have her "breathing down your back" while assuring the safety of your kids is ridiculous. Glad you could laugh about it though. Wonder what she'll come across next to watch?

Congrats to you Mari - you have wonderful parenting skills and the ability to find the humor or absurdity as in the case of the watching woman, of it all. It was all I could do to read the story and not want to jump into the story and see if there was anything I could do to help!!! Debbie

OMG - I cannot believe the nerve of that woman. She had to know that it was totally rude to sit there and watch you but on top of that to do it so blatantly. I am glad you handled it so gracefully. I don't think I could have. Anyway, best wishes for your next outing!

From a lurker in Dallas!
KS

omg woman! i SOOOOOOO know the feeling! same thing happened to me! an audiance watching, saying they want to "see this" while i am sweating my behind off strapping babies in one-by-one, crawling over suburban seats and such! holy moly. always an adventure, eh? and yet, it still feels good to get out and a big feeling of accompishment at the end of the day! you go girl!!! wish we lived close by!

I can not believe that she watched you! She could have at least let you be;) Glad you got to go to Target and have an adventure! Good on you for taking the kiddos by yourself too!
You go girl!
~Elyse~ in DFW

So...when does the circus come to MY town? Such a cute little story, you poor thing. People are just amazed at what a stong mother you are. God picked you for a reason! I love reading your stories and the babies are just adorable.

Eventually we can put your kiddos in umbrella strollers, take all 7 of our kids to Target, and give each one of mine a stroller. Won't that be fun!! :) You ROCK GIRL!!! I would have been struggling to keep my mouth shut in that situation.

i love your blog!!! i live in houston too so i know how you feel when you go out and about.... but its twice as hard for you.

Wow, the least she could've done is pulled around to the next row and watched from a distance. Still blatant, but a little less conspicuous. Houston really must be hurtin' for entertainment to get a kick out of one woman's "unloading and reloading" 4 babies! What a feat! So, I was wondering...did you purchase anything? And if you did, do you just let the quad-lets hold the items? I know you're SuperWoman, but it would be near impossible to steer the Runabout and a shopping cart at the same time.
Great e-Venting!

Moni - I would've let them hold on to the items but they probably would have just eaten them anyway:) Our Runabout came with a small basket that hooks onto the back; can't get much in it but it helps. The other thing I have done is pull a grocery cart behind me while I push the Runabout - a little nuts but it worked (Gen, thanks for that handy tip).

Mari - I just had to leave a comment after reading this one - you're awesome. I am in awe of your parenting. It's obvious why God chose you and Chris for the wonderful parenting experience of quads. Having a 9 year old, a 4 year old and a 16 month old; I live for the shopping trips when Daddy stays home and I get to go ALONE! I can't imagine trying to do it with four - all the same age! I think you handled the situation as gracefully as possible. I would have struggled not to make a comment - way to go Holy Spirit!

By, the way Ian loves the "At the Park with Jazz" video. We usually have to watch it at least two times in a row. For him to sit still that long is an amazing thing in and of itself!

"When words are many, sin is not absent, but he who holds his tongue is wise." Proverbs 10:19

You are too cute & the babies are precious! I always love the photos, captions & music you guys choose. Obviously, you are a very creative & artistic couple with a flair for writing.
Your babies are seriously some of the cutest I have EVER seen. I heart them! thanks 4 sharing.
oh! and the lady who watched you? Get a friggen life. seriously!! she should of at least not told you she was watching & pretended to do something else in her car. wow, kudos to you for being so classy about it.

I had a woman stop me and the kids outside the ice cream store. The five of us were walking to the car.. holding onto a jump rope. The kids were being perfect angels (to my surprise).

She took one look, screamed, and said "GOD SAVE YOUR SOUL .. those children are an unatural evil!

I just about died.

What it wrong with people?

ps: way to go with the solo outing! You ROCK!

I am amazed at the response of the general public. I never knew there were so many curious, caring, and utterly rude people out there until having quads. I absolutely love your response...what a great verse. I will memorize it and put it to good use during times like this. Way to go for venturing out alone. I am not that brave yet.

I am so impressed that you bring them all out! NExt time I'm down your way we will have to park next to each other with our set of quads! (My parents live in Katy) I do hope to meet you at sometime! Can I link your blog into mine?

you give me hope that it is possible to get out with multiples! we have GGGG and a 4yo boy. you handled that so well, especially with the lookie-loo sitting in her car to "see this" :O and to remember and meditate on God's Word through that all. very cool!

-from a fellow quad mom of GGGG

Sites We Love & You Will Too!

Goerlich Quadruplets
We are parents to three rambunctious boys and one even more rambunctious little girl who were all born in the same minute of the same day in August of 2007. This entire journey has allowed us to witness everyday miracles and proves to us that God is very much alive and walking among us. Great challenge has come with the miracles and we are learning to choose to be joyful through the daily tests. This blog is a collection of memories and a look at how we learn to grow more mature in our faith even as our faith is stretched to the max at times. Thank you for walking it with us, your encouragement and prayers are such a blessing to our family.